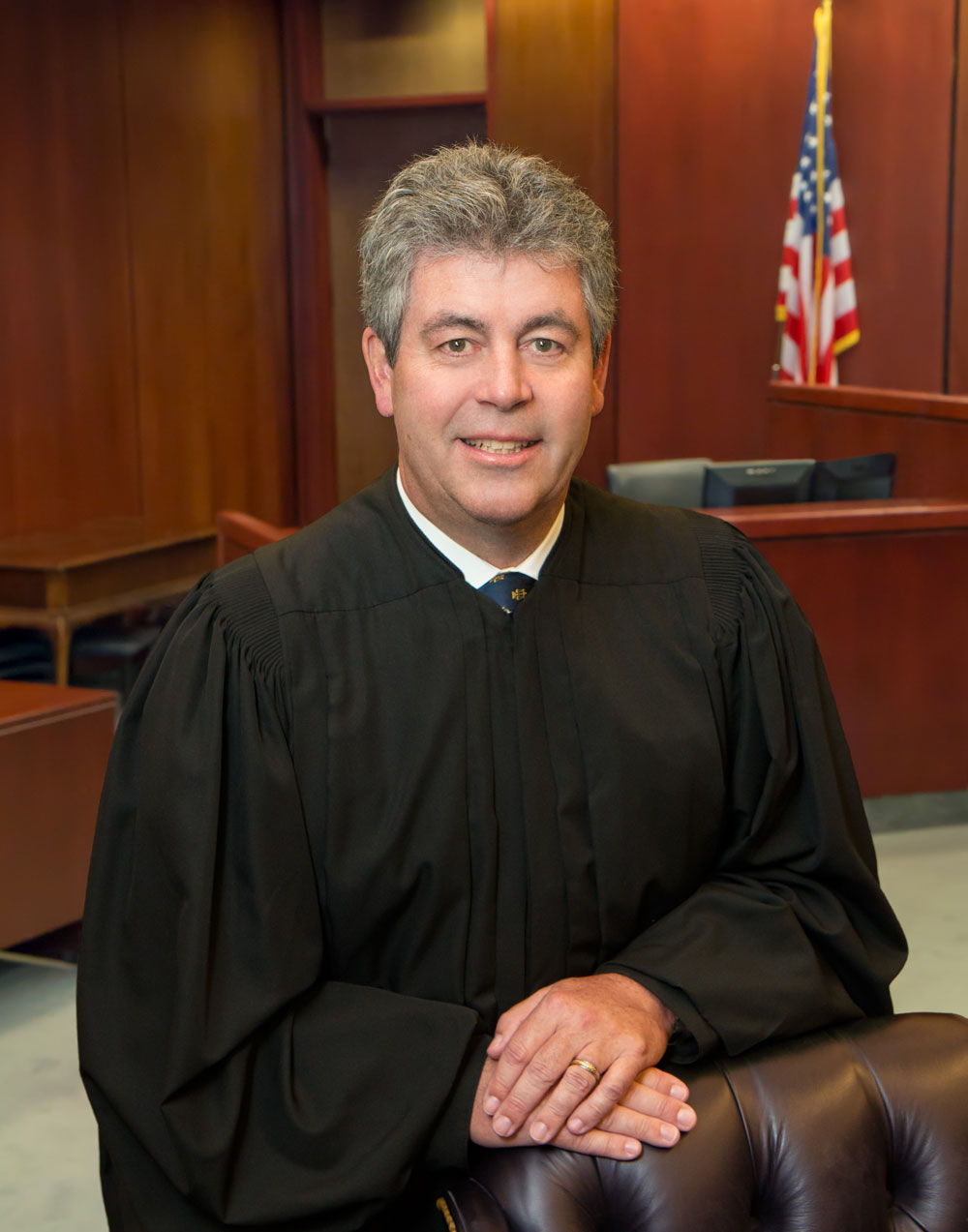 Judge David Boynton is the most senior judge sitting on the Circuit Court for Montgomery County. Having first been appointed by Maryland’s then governor in 2003, he was elected in November 2004 to serve a 15-year term which he completed in November 2019. Based upon his outstanding performance on the bench while serving the citizens of Montgomery County, Judge Boynton was reappointed by Governor Hogan to continue to serve while running as an incumbent candidate to retain his position in the 2020 election.

During his over 16 years on the bench, Judge Boynton has acquired the depth and breadth of judicial experience rarely seen in judges, having served with distinction in handling thousands of cases that have come before him during his four and one-half years in Criminal Court, three years in Civil Court, six years in Family Court and three years in Juvenile Court.

He has presided over scores of criminal jury trials involving, but not limited to, murder, rape and sexual abuse, child abuse, assault, robbery, burglary, carjacking, theft, distribution and possession of illegal drugs, and arson whereupon conviction of the defendant, at sentencing, his focus has been on rehabilitating the offender where possible and protecting the community when necessary.

Due to his years of education, training and experience in complex criminal and civil litigation involving scientific and technical fields, he was accepted as a candidate to receive specialized training from national and world experts presented by the Advanced Science and Technology Adjudication Resource Center in Washington, DC. Upon completion of that program of study, Judge Boynton was elected an ASTAR Science and Technology Fellow, the only judge in Montgomery County holding this designation.

In Family Court, Judge Boynton has decided hundreds of cases involving custody and visitation of minor children, spousal and child financial support, division of marital property, domestic violence protection petitions and the enforcement of child support where the overriding consideration is providing what is in the best interests of the child and setting the foundation for the future success of the divided family once the proceedings have concluded.

In Juvenile Court cases, Judge Boynton has presided over many delinquency trials for charges as serious as those handled in adult court where his focus has been on providing services and guidance to youthful offenders so they can become successful and productive adults. He has also handled many child abuse and neglect cases where services are provided to protect vulnerable children but sometimes result in the most severe cases with the termination of parental rights.

Judge Boynton has also handled numerous appeals from District Court criminal convictions and civil judgments, as well as numerous administrative agencies including the Motor Vehicle Administration, Montgomery County Board of Appeals and the Maryland Workers’ Compensation Commission to determine the legal correctness of their decisions. He has also sat on many three judge panels reviewing the decisions of his fellow judges in criminal, civil and family cases. Judge Boynton has also presided over drug court proceedings.

In addition to his judicial duties, Judge Boynton has for 8 years taught Civil Trial Practice to law students at the Catholic University of America Columbus School of Law. He has also coached competitors and judged many high school and law school trial advocacy competitions over the years.

In his 16 years on the bench, Judge Boynton has displayed the patience, humility, knowledge, wisdom, judgment, common sense, compassion and humanity expected of judges by the citizens of Montgomery County.

Prior to his appointment to the bench, Judge Boynton’s 21-year career was that of a trial lawyer handling thousands of cases, and conducting hundreds of trials, both jury and non-jury, in the area of criminal and civil law. He spent over 17 years as a prosecutor in the Montgomery County State’s Attorney’s office where he handled the investigation and prosecution of every conceivable kind of case from DWI to Murder. He received specialized training and experience in the areas of electronic and forensic evidence, ballistics, expert witnesses, rape and sexual abuse, child abuse, domestic violence, arson, accident reconstruction, cause and origin of fires, auto manslaughter and homicide.

Judge Boynton specialized in the prosecution of violent crimes, many of the most notorious cases in Montgomery County. One such case was that of Garrett Wilson, a man charged and convicted of smothering to death his two infant children in order to collect life insurance proceeds. This cold case investigation and successful prosecution served as the basis for the true crime novel While Innocents Slept by Adrian Havill, and numerous TV productions.

As a result of his experience and reputation as an excellent trial attorney, Judge Boynton was invited to become an adjunct at the National Advocacy Center in Columbia, South Carolina where he frequently taught and lectured state and federal prosecutors on specifics of trial advocacy and homicide prosecutions.

During his time as a prosecutor, the death of a dear friend’s teenage son in a drunk driving accident caused him to create an alcohol awareness and education program which he presented to many local high school students and parents. Several years later Judge Boynton was presented with the Montgomery County Bar Foundation’s Community Service Award for his efforts in attempting to curb the incidence of teenage drunk driving fatalities.

For more than three years, Judge Boynton worked in private practice at the law firm of Donohue, Ehrmantraut and Montedonico. In criminal cases, he defended citizens, both paying clients and indigent clients, accused of felonies and misdemeanors in Maryland and DC courts. In civil cases, Judge Boynton specialized in complex litigation cases involving medical malpractice, products liability and construction disputes.

Before his appointment to the bench, Judge Boynton was twice elected to serve on the Executive Committee of the Bar Association of Montgomery County. He was also twice appointed by the Chief Judge of the Court of Appeals of Maryland to serve consecutive 5-year terms on that court’s Character Committee reviewing the qualifications of those individuals seeking admission to the Maryland Bar. He also served on that court’s Attorney Grievance Inquiry Panel reviewing complaints of misconduct brought against lawyers.

Judge Boynton is a lifelong resident of Montgomery County growing up in Silver Spring and then Rockville in a close-knit family with four siblings. He attended public schools eventually graduating from Colonel Zadok Magruder High School where he excelled in academics and sports playing varsity basketball, baseball and golf during which he and his teammates were County, District and Maryland State Champions.

He attended Gettysburg College where Judge Boynton began his studies in pre-med, and eventually graduated with a B.A. in Business Administration. His academic performance earned him a national Honors ranking on his senior comprehensive exam, and induction into the Pi Lambda Sigma Honor Society for Business Administration majors. He was a member of the Phi Sigma Kappa fraternity where he served as President, and worked as the Business Manager for the school newspaper, “The Gettysburgian”. He also played four years of varsity golf winning many tournaments including the Middle Atlantic Conference Championship. In 2015, Judge Boynton was inducted into the Gettysburg College Hall of Athletic Honor.

Judge Boynton received his law degree from the University of Baltimore School of Law, where he also was active in Moot Court and Trial Advocacy competitions and served as the Chief Judge of the Honor Court, all while working as a law clerk at the then Baltimore law firm of Cohen, Snyder, McClellan, Eisenberg and Katzenberg. Upon graduation from law school, Judge Boynton served as a judicial law clerk to now retired Montgomery County Circuit Judge William M. Cave.

Today, Judge Boynton lives in Bethesda with his wife Magdalena who after forging a distinguished legal career at the U.S. Department of Justice now works at a specialized bureau of the U.S. Department of Treasury. They relax together by enjoying many outdoor sports and activities as well as domestic and international travel. They mostly enjoy spending time with their 4 children, daughter and sons-in-law, grandson (with two more grandchildren expected this summer) and entertaining their very large extended families.