Lawyers and the Urgent Need for Action 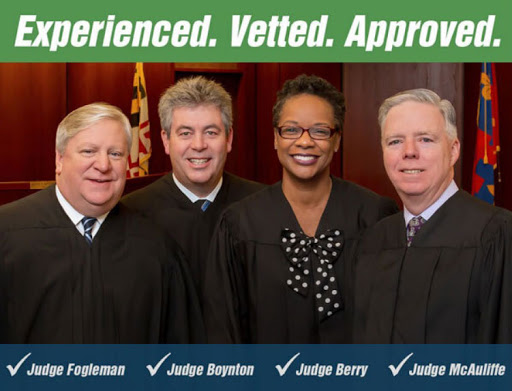 In my first email to you, I discussed how judges are selected. Each of our four sitting judges (Berry, Boynton, Fogleman and McAuliffe) was selected after going through a rigorous process requiring months of probing interviews and background investigations.

It is also appropriate that you have some facts about the challenger, Ms. Marylin Pierre.

FACTS:
◦ Ms. Pierre has never tried a criminal case in any Circuit Court in Maryland.

• CORRECTION: An earlier version of this email stated that Ms. Pierre had “never tried a contested family law case in the Circuit court for Montgomery County.” A recent upgrade to the Maryland Judiciary Case Search System revealed that during Ms. Pierre’s years of practice she has been involved in approximately 10 contested civil cases in Montgomery County to include those involving unrepresented parties.  Our regrets are extended to Ms. Pierre for the error.

FACT: The Administrative Office of the Courts does not “vet” or “qualify” candidates. It simply verifies that an applicant is a licensed attorney, over age 30, and lives in Montgomery County. Most non-lawyers would not know this.

• At a 5/11/20 forum, Ms. Pierre claimed: “I proposed a Bill … and pushed it with various legislators … to make it easier for a married spouse to adopt the child of a member of a single sex couple.”

FACT: Both the author and the sponsor of the Bill confirm that Ms. Pierre had no involvement with this Bill. Neither of them ever heard from Ms. Pierre on the issue.

• In a 5/23/20 tweet, Ms. Pierre stated that the sitting judges “are not really diverse. They are an in-group. Most of them have worked at the same law firm, go to the same church, and are related by marriage.”

FACT: Ms. Pierre knows full well that every word of this is untrue and misleading to voters. Yet, it remains on her campaign twitter account.

Misleading and Confusing Statements About the Law

• On 6/1/20, Ms. Pierre tweeted: “As for the others 3 [Minneapolis] officers, ‘Lock em up’ and then the burden is on them to prove that they are not guilty of ‘contributory negligence and involuntary manslaughter.’ ‘Cops are not immune’ from arrests.” Weeks later, when the problems with this statement were raised, Ms. Pierre denied she tweeted this, and blamed a staffer for posting this tweet in her name.

FACT: Anyone who grossly misunderstands the presumption of innocence in our system, should never be a judge. Additionally, “contributory negligence” is a defense to certain civil tort claims, not a crime. Even if Ms. Pierre is telling the truth about the staffer, she violated ethics rules requiring a judicial candidate to “review, approve and be responsible for the content of all campaign statements.”

• In a 5/30/20 tweet: “Why is it that you will not hear anything about the injustice situation in Minneapolis from our Mo.Co Sitting Judges? Do you even know how they would have reacted if that was happening here? This not about rendering a verdict, this just being humans & Americans.”

FACT: As a judicial candidate, Ms. Pierre should be familiar with the rules governing judicial conduct: Maryland Rule 18-102.10 specifically prohibits judges from commenting on pending or impending cases in any court.

• On 5/20/20, Ms. Pierre tweeted: “Also there are some sitting judges who are only English speakers send people to jail because they could not speak English and discriminate against people based on skin color, country of origins, religious backgrounds or sexual orientations. Moco is cosmopolitan & need more!”

FACT: Again, Ms. Pierre knows full well this is untrue and misleading to voters. But beyond being inaccurate, Ms. Pierre’s tweet fans flames of social unrest, including on issues of race and nationality, for her own political advantage.

Unprofessional Conduct as an Attorney

• Court records show that on 8/11/94, after becoming an attorney, Ms. Pierre was found by Circuit Court Judge S. Michael Pincus to have evaded service of process. The Process Server’s Affidavit said Ms. Pierre hid from him 13 times when she was being sued for nonpayment of a debt.

• Court records show that on 6/21/96, after Ms. Pierre became an attorney, Circuit Court Judge DeLawrence Beard issued a Body Attachment Order for her when she did not appear at a Show-Cause Contempt Hearing against her. (The Order resulted from her failure to appear at a Hearing in Aid of Enforcement of a judgment against her.) She was taken into custody by the Sheriffs and posted bond for her release. At an 8/19/20 online event, when asked if she had ever been arrested or taken into custody by law enforcement, Ms. Pierre said “no.”

THE ABOVE IS A NON-EXHAUSTIVE LIST OF PROBLEMATIC STATEMENTS AND ACTIONS OF MS. PIERRE.

By Authority of Nancy Hosford, Treasurer